Home ISSUESRAREZAFate vs Flux in The Modern World

Life is an odd meandering river of time, something that takes unexpected turns and twists and yet can also recoil back and return to the familiar footpaths that we know, places and phases which we all typically envision finding ourselves in at some point. We all expect to grow old. It’s our fate. At least if all goes well, and that may also have been a fairly loose definition of fate as a term in the first place.

Fate typically ascribes a lack of control to the human condition, it hints at elements beyond our knowledge and intent. In the past, it was allocated to supernatural entities and a belief in beings who transcend the mortal realm. At first this was the pagan deities who were envisioned gambling with human lives for their diversion, life rendered a chessboard or akin to snakes and ladders, everything dependant on the roll of a dice with fate deciding through chance to determine some-one a hero or a lover or a no-one. For fate of course typically only seems to deal with the major players, no-one is ever fated to forget their keys or stub their toe, unless it leads to a more consequential event.

But what does fate mean in 2020? Religion is still here of course, but less widespread and more flexible in its beliefs. The majority of people today don’t believe in absolutes and strict scripture to be taken literally, and it is uncommon to find some-one who still believes that the reason they didn’t get into Oxford University was because it was God’s will.  There has, however, been a resurgence in astrology. There are apps that will provide a layout of your horoscope according to your moon sign and sun sign and provide daily advice. Astrologers are far from the caricatures of elderly ladies with wide gesturing arms laden with bangles and turbans covering their hair, but are becoming younger and far more on trend, living in cities and collaborating with major names in fashion alongside high street brands. Astrology is often vague about the future, it implies certain possibilities depending on certain possible choices that are often intertwined with your past and emotions.  Instead, the fate it offers is more personal, or rather about personality. Your life plays out the way it does in part because of decisions you make which are in themselves dictated by your feelings and personal quirks. Astrology offers a personality reading, an examination of your preferences, dislikes, habits, how you act around others, etc, and explains it through your star-sign. It highlights moments of potential difficulty, such as the recent crisis of mercury being in retrograde which was seen as a reason for a constant stream of ‘off’ days and mishaps. It’s greatest appeal perhaps is in how it offers an identity rather than a fate.

The alternative route is one granted by modern science. A twenty-first century twist on medieval humours and 19th century phrenology.  These days the answers lie within our genes. We are programmed to act a certain way, it is in our blood rather than our stars. It is our genetic structure that is responsible for our strengths and weaknesses, our skills whether intellectual, artistic, or athletic. It is also held responsible for our illnesses. The possibility of developing Alzheimers is hereditary. Equally some strands of cancer such as breast cancer often recur in the same family, You are substantially more likely to contract breast cancer if your grandmother/sister/aunt/mother had breast cancer diagnosed before the age of 50. There is also the argument that your genes can also determine your mental health, the argument being that you can be genetically predisposed towards developing a mental disorder. This is still uncertain, however, as it is difficult to trace. There are no genetic tests to confirm a diagnosis of depression for example. Additionally, those who advocate that mental illness is wholly in your genes often neglect the impact and importance of environment and life experience in forming a person’s development. It can be a useful mode of avoiding aspects that we would prefer not to acknowledge and explain away troubling ambiguities.  More importantly, however, even if your genes may be responsible for a medical issue of some sort, they do not dictate how you choose to respond to it and your diagnosis should not be your fate.

Genetic testing, to the healthy who are unconcerned about possible damaging genetic mutations, is presented as offering a way of optimising your existence. A mode of finding the best diet, exercise, sleep schedule etc.  BupaSmart DNA, for example, offers to help you locate any food intolerances or sensitivities, how your body responds to exercise and how your mind reacts to life – whether you are a ‘warrior’ or a ‘strategist’. All aimed at helping you achieve a perfect state of balance in life;  with an at-home kit for the grand price of £169. Ultimately, this reflects the modern involvement with the concept of fate. It is no longer about explaining away hidden mysteries, but more about control. Theoretically, we technically have control over our lives, (all being well); for example, we can choose where to live. It’s no longer actually impossible to decide to suddenly leave the country/city and move to somewhere completely different. There will be a substantial amount of logistics and admin, but it is not unfeasible. Equally, we are in control over what we prioritise in life whether it be money, an interest in art, or a desire to travel the world.  That being said, the reason we still look for certainties and an explanation for a lack of agency on our part, is because life feels out of control. For half the population in Britain, for example, Brexit is happening against their will. Equally climate change feels unsurmountable, and that combined with the recent outbreak of coronavirus, it is no wonder that we seek to contain our fears over the wider channels of life through an attempt to define the smaller elements.

It is what people have done for centuries whenever they are faced with something fearful. You give it a name or a reason because otherwise it all seems rather pointless. 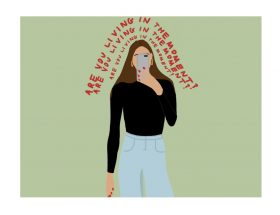