Her father had been dying for seven years and a half. And now that he actually died, she was far from expecting it.

She left her office as soon as she received the call. Things and movements were clouding around her head and taking the place of her thoughts. She had forgotten her salad in the office’s fridge but inside her she felt she’d eaten stones. Or stones were on her belly, as if she were lying down, and rocks and soil were accumulating on her chest.

Apart from that, she was feeling normal. She was on her way to the hospital through crystal towers hiding world-scale secrets and tiny green areas lit by streetlamps. The pavement grey slabs were still the same, black suits dead on trajectory,  driven around by ever-equal thoughts. But something had changed. They’d told her.

When she got out of the tube, the air was different, for a second at least. The city had forgotten about perfection; irregular holes tormented the asphalt at crossroads and windows were true windows.

As she approached the structure, a weird sensation came to her, as every time she visited. But this time it’s different, she told to herself, but it wasn’t.

She introduced herself at the welcome desk. She received a bored look, then a frightened one, then commiserating, as the young woman told her the room number and how to get there – but she remembered perfectly. It was mechanical, after a certain amount of times. The stairs on the right, third floor, walk all along the corridor, right again, second room. First bed.

Whiter than ever. A white dad was sinking in the white. He was sleeping but he never slept with his fingers crossed above his stomach. He was praying but he never prayed.

She was staring, her dad who was her dad and who was not. The doctor stood beside her, she didn’t turn.

He passed away without suffering, he said.

You don’t know, she thought.

He was always speaking about you, he said.

He was obsessed with his sister, she thought.

Olga arrived noisily. She was an acquired relative who had somehow been entitled the name of Auntie. She touched dad’s forehead and hands and tried to stop her tears. She crossed herself, then she looked at Maria and said: He’ll always keep an eye on you from above, from now on.

Maria didn’t answer, and there was only the dead body for some time. Then Olga: It has been long. Hasn’t it? From the first stroke.

It was spring, right? Seven and… was it April? Or May?

More than seven, she went on. With ups and downs, and always getting to this hospital, more and more. Poor soul. But he had a beautiful life.

When will the ceremony take place?, she asked again.

Maria took a while to answer, visualise her agenda, then mechanically: After tomorrow, I’m the morning. In the Church of San Sebastian.

I am sure it will be a great ceremony. All the people that loved him… He was very lucky.

Olga hesitated. Then she asked: Has his sister called?

She is younger, isn’t she?

Oh, dear, she must be destroyed. Maybe you can call her and comfort her.

Maria fell in silence again. She sucked her lower lip between her teeth and started biting away thin cuts of skin.

Since my mother left him, he didn’t want to have anything to do with his past anymore.

But you cannot ignore her, darling. It could be a problem. And if he kept repeating her name, maybe he hadn’t really burnt bridges with his country.

You’ll need to call her. But not now. When you feel better.

At the ceremony, few people attended. Most went out and back to work without changing their clothes nor stopping for more than a word. Then it was done, and she felt empty. It was as if nothing had happened, nothing unusual, but now her dad was dead. Gone. Six feet underground.

For days she was numb. For a month she felt the void, then she got used to it. As she had to the idea he was in the hospital, before, and he would soon die, but was not dying. Now he had died, but somehow it didn’t change much. Only a side thought tacked her from time to time.

One day she took the phone, even though she was not expecting she would do it. She dealt the only number she had ever known from there.

Months passed and no one called. No one answered the few times she tried to call again, and the idea came to her mind to just go. Just a visit, on the traces of her story. A little trip to the South, she would easily justify it. Strictly to be done alone.

On Thursday of some weeks later she was on a plane. She had got nervous for the luggage, and the schedule, and now for the loud group sitting behind her. Maybe she shouldn’t have planned all this. The vehicle started moving, scrolling across the runway, and she tried to imagine what the town would look like, but she could not.

After the plane, she took a train, after the train another train, then a taxi. She had booked a hotel in the town nearby. At least they should speak English, they said.

She arrived with darkness and could not spot the differences. The words she heard around her were echoing in her memory, even though she could not grasp them.

On the next day, she took another taxi to the town, and she discovered it was a village. Few homes along a street. She could not figure out that some part of her came from there; the dust and the yellowish plaster, that grey olive trees and that crisped agave; they did not belong to her. The light was full and warm, the outlines sharp, yet, it all looked engraved in a solid block.

She said her father’s name to the taxi driver, he pushed out his lower lip and lifted his eyebrows.

She said his name to the woman sitting out of her house on a plastic bench, with a white old cotton apron. She stared back, her wrinkles deep, but she sat as if she had not heard her.

She said his name to a man in his sixties who was carrying a bulked TV on his shoulder. He said: Quella era la casa sua. Ma prima di tutto quanto.

A long time ago. Before she was born. Before he had married her mother and moved away.

Maria was confused. By the language, by the heat, by that dried vegetation infiltrating the old houses, none of them in condition to host someone, and still they did. How did they survive?

A kid came running, then walking, suspicious, towards the car. He must be four, his black hair plastered with mud.

Maria said her father’s name to him as well, and then she added: Sorella. Vecchia.

The kid stood still. Then he ran away, stopped after some steps, turned and bent his arm towards her. She followed, walking carefully on dust.

They reached the other side of the village. Some houses were still down, where the earthquake had kicked them twenty years before. Maria could not compare, her life so far away, she struggled to understand, or remember.

The kid led her to a house in ruins, whose roof was still up there though. The door was open, and they entered the dim light. The heat was kept outside. Flower and gold decorated cups and silver cutlery were lying on a table, heavy dark furniture, a stale smell, white lace curtains weighted down by dust.

Her back to the door, a small woman barely appeared from her wheelchair seat. She turned around; her hair had grown so grey, her skin so thin, her bones so short, her irises like a thin layer of water.

The old woman crisped the roots of her eyebrows, slightly. She said, Non sono io.

Io… She stopped, a smile brushing against her face from long ago.

The old woman went quiet and close her eyes as though she’d better sleep.

Maria stepped her feet, rubbed her sweaty palms against her trousers, she went out. The sun wounded her eyes.

You can’t understand life without death, she translated in her mind. He said he always wanted it close to him, and this would save his life, until the moment it takes it away. 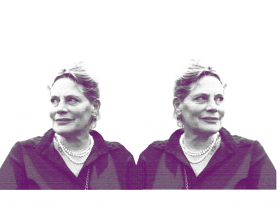 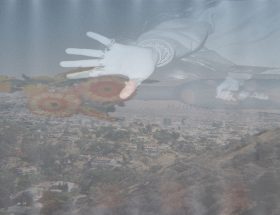 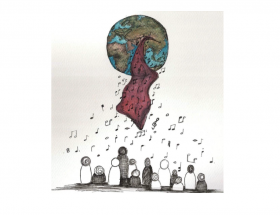