Kae Tempest is an award-winning author, recording artist, playwright and spoken word artist. Having attended the BRIT school for Performing Arts and Technology, Tempest won the Ted Hughes Award for their poetic work Brand New Ancients in 2013, played a set at Glastonbury, was named a Next Generation poet by The Poetry Society, I could go on… Their work grapples with behemoth concepts: consumerism, race, class disparity, gender dysmorphia, without succumbing to the pressure of exaggerating and aggrandising their language for the institution. Tempest quite simply, calls it how it is.

Their poems are agitated, sonic and kinetic, always alive. The Point is a whispering, moving ditty of comfort. Ballad of a Hero is symphonic, a gritty evaluation of the psychological effects of war. The lyrics of People’s Faces form a deceptively simple expression of love:

Max Spokes of Cherwell has adeptly coined Tempest ‘the protest voice of a generation,’ a poet that ‘deserves to be listened to.’ There is no doubt that Tempest uses their art to comment on the flaws, the failings and the fault-lines of modern society, but does so in a way that perceptively  demonstrates compassion, understanding and an acceptance of their own potential shortcomings.

In their spoken-word poem, ‘HOLD YOUR OWN,’ Tempest touches on the themes that they will later expand on as they turn their hand to non-fiction. On Connection has been described critically as a ‘meditation on the power of creative connection.’ On Connection however, is much more resounding (an expectation from an artist such as Tempest) than a silenced introspection. It’s a treatise on (self) awareness: one with which not only poets, but artists, carers, scientists, and simply, people can identify.

On Connection, as mentioned, is so much more than a meditation. It is a semi-autobiographical, honest and tender opinion piece on forming creative connections, raising self-awareness, and learning to love who you are. After suffering through their own difficulties, Tempest demonstrates that their path has never been without its pitfalls. A treatise on not regretting the past nor leaning too heavily on possibilities of the future, On Connection is succinct and beautiful in its linguistic simplicity.

Tempest reasons that if creativity is an act of love (one not solely confined to the arts as many would initially believe) then connection is when one pays close attention to the details of experience, the minutiae of living. Along this line of thought, creative connection is so important, especially in contempoary society, as it decidedly ‘brings a person closer to themselves when they have started to drift’ but also raises awareness of other people and their situations, their experiences, allowing for the possibility to forge deeper connections with others. Many times, Tempest ensures to disclaim that a creative connection does not have to be borne from the traditional conception of creativity (producing art), rather, from what brings one joy in life. As such, lovingly preparing and cooking a meal for loved ones, walking the dog, mowing the neighbour’s lawn can be considered an act of creativity. Creative connection therefore, to Kae Tempest, is the alchemy between text (or thing), author (or giver) and reader/audience (broadly, recipient). Indeed, deep meaning, and a meaningful connection to a text, is only achieved by a ‘connection between the author, the text and you as you read, at a particular point, with a particular set of circumstances informing a particular emotional response.’ Perhaps this is why Tempest favours performance poetry as their output, as in some ways, by reading their own poetry in a performance for their readers, they are not just author but also text, making these creative connections deeper and easier to fashion and maintain.

Tempest’s form, spoken word, is enjoying increasing vitality in the current age. Better, it was enjoying increasing vitality in the pre-Covid19 era, when sitting in a bar and breathing the same air as 35 other drunk punters was common, an experience that never raised a thought. To be rhythmic, passionate, simple and relatable are the main constructs of being a ‘good’ spoken-word performer, pillars that many would argue are embodied in Tempest’s repertoire. Critical thought often points to 1980’s Chicago for the emergence of the genre or art form,

where one of the first official poetry slam competitions was devised to remove poetry from its highbrow, elite, social position and into the streets. Spoken word, however, predates the 1980s. T.S Eliot once said that ‘poetry remains one person talking to another’ which only serves to underscore the oral nature of literature. Indeed the orality of poetry traverses all of literary history, pre-social media, pre-print books, pre-manuscripts. In many ways, Tempest is simply returning to a historical form in order to present their commentary on current matters.

After 20 years of yielding the microphone, Tempest has honed their craft in performance poetry. Holding the mic so close, their clear, South East London twang seems to effortlessly cut through any packed bar, any crowded room, it even speaks directly through the screen to YouTube viewers. Their inflection of pain, anger, injustice that peppers their written works sings through, and is reflected quite harmoniously in performance. Harking back to Max Stokes’ critique, Tempest’s writing is made to be listened to. Given the current socio-political situation, a pandemic and (at least in the UK) a third national lockdown, it isn’t surprising that spoken word performers and events, in the absence of presence, are turning to technology for support.

Tempest has a surprisingly scathing attitude towards technology and, in particular, the notion that we are in an age governed by social media and its cultural expectations. As someone that studies the positive effects of social media on literature, more specifically poetry, and its accessibility to new and old readers alike, it seems both  a fresh perspective to me, as well as one that is somewhat supercilious.  Tempest is a writer that benefits from the online space (think of their YouTube with over 3 million views at the time of writing, or their Instagram and Twitter accounts with a combined 131.3K followers). However, Tempest’s apparent disdain for social media is perhaps more justified in its connection with… well, connection.

Competition has always been an intrinsic value in the arts. Artists have always been competing for the attention of the audience, the critics, the box office/book/record sales. And yet, according to Tempest, ‘the charades we are expected to perform have become real and swallowed us into the act.’ In a society suffering through a global pandemic, and as a result one that is becoming more heavily reliant on virtuality in place of physicality, Tempest critiques the appearance of the ‘real’ self, in conjunction or connection with the projected self. Indeed, they caution readers that creative connection cannot be sought where the reality of the text, the author or the reader is warped by the online space. However, we must keep in mind that, at least in  this moment, a  ‘selfie-system’ is affording some level of connection, even while it means that Tempest’s ideal cannot be achieved.

On Connection is a text that introduces a distinction between connection, creativity and creative connection. Kae Tempest is a writer that is not only sensitive when commenting on the present-day society and its cultural pressures, but they are also keen to bolster others. Forging creative connections, according to Tempest, heightens one’s own self-awareness, constructing a better, deeper connection with oneself as well as with others, a connection that is coined ‘creative,’ but one that exceeds traditional notions of ‘creative output.’ Characteristic of this generation’s ‘protest voice,’ Tempest critiques consumerism in favour of a more meaningful exchange: creative connection. 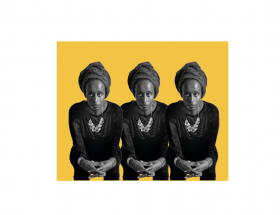