Home CURIOSITY, CALAMITY, DYSTOPIA & UTOPIALiving in Shades of Cool – A Complicated Relationship to the Colour Blue

The colour blue prominently features throughout Lana del Rey’s music career. Her lovers exist in shades of blue; they seem to love her in blue, and she too seems to love their blue aloofness from afar. This is perhaps most obvious in the titular track of her renowned album Norman Fucking Rockwell, where Lana sings about her self-loathing poet lover’s head caught between his hands as you colour me blue. Her lover’s perception of her becomes her own reality as she embraces her unhappiness in having settled for him. Lana belts out a resounding you make me blue, magically layered on an instrumental conclusion, the violins heaving a melancholy melody as the first track leads on to the following. He paints her blue again in “Venice Bitch,” blue in her happiness, the coloured filter that illustrates her life looming over her reality.

The immature-man-child-visionary-artist of Norman Fucking Rockwell seems far away from the men that Lana has previously sung about in a starry-eyed haze, the men who live in the shades of blue that feature on Ultraviolence. The boy blue with blue eyes, the one who loves drugs and jazz as much as his girlfriend. Blue symbolized cool, disconnected, powerful– the colour of her lover’s jeans in Born to Die, the ink of his snake tattoo in Paradise. Lana was fascinated with the blue hydrangea from “Old Money,” the detached world of cold cash and racing cars, the blue magnificence of the sublime nature her manic pixie dream girl character sings about in “Black Beauty.”

She pines after the man who could never love her in Honeymoon on its titular track, cruising to the blues, asking for him to love her in blue, dreaming of his love with wistful longing providing a beautifully desolate hue to her music. Throughout the album she wishes for his love, going so far as to cast a spell to manifest it in her life in “The Blackest Day,” claiming blue as her favorite colour and tone of song.

The colour changes its tune on Lust for Life where it becomes a warmer colour, more reachable and reasonable to her. Out of the black, into the blue she sings as its closing lyric, away from oblivion and onto better things, reaching the blue skies she sings about in the titular track on the album.

Blue is only mentioned once on Chemtrails Over the Country Club (and she doesn’t even sing that lyric herself), but then it becomes a central motif in the relationship between herself and love, more specifically falling in and out of the feeling. Blue is no longer a distant colour she pines for in the men whose affection, world, and presence she craves above all else, but rather one Lana has now appropriated for herself.

For one, the title of Blue Banisters already makes the fact that the colour will heavily feature throughout the album. She mentions it a whopping twenty-seven times in total, and as a colour it goes through a variety of meanings as well. Lana, who until NFR! was known for constructing characters with a high-pitched voice, made up of literary archetypes, and kitschy references – a Cherry-Cola Coney-Island-Queen Glamorous Old Hollywood submissive ‘Other Woman’ – releases some of the most personal, genuine, truth-telling songwriting. She ditches the Lana persona and embodies Lizzy Grant, a Cancer Sun with a Scorpio rising, a complex character with years of experience in the music industry who speaks of her relationship to love and family as the bare bones narrator of her own life. I find Lana’s musical oeuvre some of the most inspiring art I have ever heard. She cares so little to be true to anyone but herself so, despite her popularity, she remains an artist telling stories in a beautiful manner. This goes both from her telling the story of fascinating characters she seeks to embody and further as her music expands into the authorial, and she starts telling her own stories.

The story she tells in Banisters changes from those in the two albums that preceded it; the album discusses the rise and fall of her romantic feelings for a man she had previously illustrated through her words in former albums. The pathetic, immature individual with an ego complex for whom she fell so hard has raised a space of reflection and growth within herself. In NFR! her love interest painted her another colour for his own convenience and sucked the life out of her as a source of inspiration for his work. Blue Banisters makes his flaws the reason and explanation for a lot of the past and present traumatic inter-personal experiences throughout her life, primarily starting with her parents. Instead of pining after and searching for another man to cover the gaping hole left behind by his abandonment, she becomes reliant upon her own personality– a radical self-love that has only recently begun to appear in her music. Previously, she dealt with men beating her, cheating on her, treating her like an accessory to themselves because she hoped that her loyalty would be rewarded with divine love as the object of their affection. We see here a reflection on what this calamity has now become.

The opening track speaks of the thing everyone relates to Lana del Rey and her listeners: blatant daddy issues. Her desire to reconstruct herself by rewriting her parents’ relationship as much as her own starts by observing a man whose validation she desires the way she wishes she had her father’s. She sees him standing from afar, this shining figure with arms open, standing blue. This blue appears to be the same hue of the unattainable man from Ultraviolence, a beacon of hopeful romance and constant craving. It becomes clear, however, that by verse two he is no longer in her life – an absence that sets the tone for the songs that follow it.

“Blue Banisters”, the title track that comes immediately after “Textbook”, reveals the story of the heartbreak that followed the breakup of the former track. This song feels, to me, like Lana distancing herself from the narrative often told about her romanticisation of the relationships that have cost women their lives and freedoms. She sings of this man as a person who offers to come around to her home to paint her banisters blue,  an image of labour that evokes a 1950s Americana romance, a man who builds his wife a home and offers her a steady life by physically constructing it. He offered to carry out the manual labour she needs taken care of so long as she gives away herself to him entirely. Lana loses the warmth of his presence and he’s not around to fix anything anymore – so she turns to the women in her life to help her do exactly that. They help her re-paint her banisters green and gray, over the blue that has been the source of so much of her pain. Her growth comes from a growing sense of sorority that washes the pain away, and her sister’s forthcoming child gives her a sense of life and happiness external to the man who promised her divine love and simply could not deliver.

The colour is again mentioned briefly on the fourth track, where she speaks of only fitting into a black bathing suit post-pandemic because of the way her body changed during its height. She laughs at the people who taunted her for it by asking them cheekily to mail her if they get the blues – which to me reads quite distinctly from the times she mentioned the colour previously in a longing manner. This, however, shifts quite distinctly when she makes the colour her most central vehicle of self-expression in “Beautiful.”

This song is one of my favorites on the album, with the vocals being some of her most stunning,  set to tinkling piano. In it, she completely tosses away her place as a muse, the role that had rendered her helpless and grieving earlier on “Blue Banisters”, and now draws herself as an artist akin to Picasso. She seems to be speaking to someone, warmly and richly reassuring them that the colour blue has taken on a new meaning. Let me show you how sadness can turn into happiness / I can turn blue into something she sings, bringing the beautiful blue, the broken blue from earlier in the album, into her own material of inspiration. Lana transforms the pieces of herself tinted blue into a cubist picture, something different and radically beautiful to the woman she once used to be in her relationships and music alike.

“Violets for Roses” continues through with the idea of being free after being stripped of an individual identity through a relationship, illustrating it in close proximity to the COVID-19 pandemic. She comes into her own, gains a sense of agency beyond the red roses for which her lover makes her trade her blue violets.

On “Nectar of the Gods” Lana hearkens back to the old Ultraviolence days, and I was pleasantly surprised to see it on this album having illegally streamed it on Spotify for several years (would I be a true Lana fan if I hadn’t?). She mentions sinking into the wild and crazy feeling she associates with the colour blue, and here I feel that since the song was written in 2014, blue maintains its thrills and alien quality- its representation hearkening back to its colder status. It remains, however, that the color is an outlet for self-expression the way it has been throughout the album. It may have been written back then, but it was indeed released now, and I think it is for a reason.

This track is quickly followed up by “Sweet Carolina,” the track that closes the album, in which the colour features prominently. The song feels like a lullaby, and maybe that’s because it is. It’s actually a song for her sister, Chuck, dedicated to the deep-seated love she feels for her, a love Lana feels has healed her and allowed her to come into her own. The colour blue is soft, it transforms into a thing as beautiful as the affection she feels for her sister’s own child. Blue loses its harsh edge; it brings the album to a soft stop, a message of closeness and unconditional love.

From the end of Lust for Life to Blue Banisters, Lana comes to accomplish her mission, leaving behind the oppressive black and stepping into the blue. She manages, finally, to “Get Free,” allowing us to hear a lovely message about healing after the calamitous heartbreak that is scattered throughout the human experience.

Paola hails from the faraway land of Mexico City, growing up in a household with an odd mixture of languages and cultures influencing the way she views the world. With a passion for film, literature, and almost every variant of artistic expression (despite her lack of ability to make visual art herself), she hopes to write personal things that resonate deeply with the experiences of all kinds of individuals. 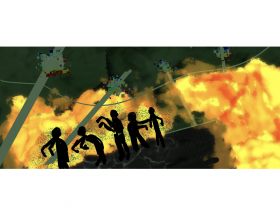 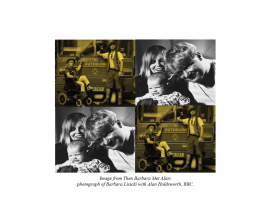 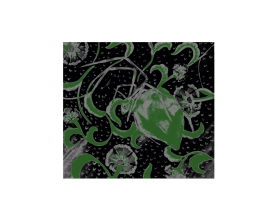