[Trigger warning: even though there is no discussion of explicit details involved, this article touches on issues relative to sexual and racial violence.]

French Revolution. Marxism and the Bolshevik Revolution. The independence of Western colonies. Stonewall. Black Power. Suffragettes and Third Wave Feminists. All social and ideological movements throughout history have been grounded on the goal of tearing down a structure which puts limits to the existence of individuals in this world, which renders them subject to some superior other, be it white men or money and the market. On respect for the integrity of the individual simply as a result of their condition as human beings. On freedom.

The Western world today seems to be taking that freedom for granted: we seem to have assumed that we are now past the stage at which it is necessary to fight for it, that it has become an immovable pillar of society. We take the existence of rights and laws as a synonym for its protection, as a reflection of the fact that innumerable actions which were once rejected by the pervasive taboo-infected psyche of society are now deemed acceptable. We believe that, today, prejudicial attitudes of the past would never see themselves unfolding in the way that they once did. We see our community (take it to be the Western world, let’s not get into the intricacies of the global North vs. global South social divide) as moving forwards. Slowly, yes, but surely.

Denying so would be rude; it would be an insult to those who sacrificed their lives for societal progress, to those who still fight for its flourishing. Yet, in our modern desire to protect freedom above all else, we have slowly begun to deconstruct it. For every step forward, we’re now taking two back.

Freedom is an abstract concept: we throw it around casually without reflecting on its actual meaning, on the reality that it entails. If you were to stop strangers on the street and ask them for a definition of the term, the likelihood of you encountering a universal, satisfying response is quite low. Our general grasp over the notion of it, however, should allow us to agree that it can be dissected into two main components: a security part, based on the aforementioned protection of the individual as a human being; and an element of permitting unrestricted expression, that is, on letting others do whatever it is that they want to do insofar as they aren’t harming others.

“I disapprove of what you say, but I will defend to the death your right to say it.”

Evelyn Beatrice Hall (not Voltaire, although she was indeed summarizing his philosophical view on the matter), outlined what is still the best summary of the origin of the second component of our definition: the fact that freedom shouldn’t be based on agreement, but precisely on respect and tolerance for ideas or actions with which one disagrees. On an understanding that, to this day, no one has the answer to the way of dealing with this nonsensical and confusing existence and that, therefore, employing our personal beliefs to suppress those of others will both keep us further away from ‘the truth’ (if there is one) and feed into an unfair and discriminatory social environment (whose consequences we should by now know to be extremely dangerous– take Nazi Germany as the most radical and cliché example, if you like).

Interestingly enough, it is this component of freedom what we seem to now be sacrificing in order to safeguard the latter, security. In the time of movements such as #MeToo or #BlackLivesMatter, of speaking up for minorities and groups which have historically been victims of a lack of freedom, having a conversation about the subject is no longer deemed to be a fundamental part of the process. We think we are talking, but we are just delivering monologues. Speeches, both physically and virtually (social media is probably the realm of existence on which it is the easiest to block out differing beliefs), state a series of premises matter-of-factly, quite explicitly implying (forgive the oxymoron) that if you don’t agree with them, not only are you in the wrong and not welcome in the movement, but you’re also a bad person, someone not be listened to, someone belonging to a different category in some new social (and moral?) hierarchy.

Now, before you accuse me of being against those movements (they were just examples) or of being an advocate for the devil’s wrongs, let me explain the kind of disagreement I’m referring to. I’m not talking about bigotry, about insults directed at POCs or women. I’m not thinking of claims such as “gay marriage is sin” or “abortion is murder”. Those spur from prejudice itself, from a belief in the undeniable superiority of unsustained claims and the desire to eliminate anything disagreeing with them. They are thus a representation of a social order where not all of us are deemed equal– and, therefore, where freedom isn’t being defended, but attacked.

I’m referring to disagreement on how an issue should be handled, on the services a state should provide, on what role courts of justice should play. If someone thinks presumption of innocence (‘innocent until proven guilty’) should be maintained even when discussing cases of sexual assault, it doesn’t necessarily mean that she’s against the #MeToo Movement, or that she doesn’t believe and feel the pain of survivors of sexual violence. Similarly, someone thinking that hating all cops (I’m aware that this is not entirely representative of the #BlackLivesMatter Movement; however, please do allow me to use it for the sake of example) is counterproductive, doesn’t entail that he condones police brutality. Similar opinions will be voiced within a spectrum, with disagreement occurring over certain elements of the major point being made.

This idea that only identical ways of forming and defending a belief are acceptable is scarily reminiscent of the pattern historically used to breed prejudice and discrimination, two of the main bullets shooting freedom down. The link lies in their relationships to security. In the case of the modern treasuring of freedom, our (rightful) desire to protect the rights of minorities has led to placing the security of those individuals above the overarching right of freedom of expression. We believe we have found the answer to the structural biases against them, and we reject any type of language or proposal that doesn’t fit in with our enlightened new perspective, for we see it as threatening to the final objective of equality. In aiming to defend individuals for their biological nature, we have come to censor others for their ideological stance.

Despite never stating so out-loud, inequality has always been obsessed with security. The fear of the status quo changing, of seeing one’s beliefs deconstructed and proven wrong led to a double process of securitization: that of the state (if we, those of us which now have the power and are all the same, prove that the others are inferior– for whatever reason– we will remain at the top, retaining control) and of the individuals forming part of the larger group to which those at the top belonged (surely, my treating others as if they were inferior must be based on something; surely, I’m not unfairly privileged– I must be better than the other). The actions, the ideas of the other were to be criminalized, presented as unworthy–  blatantly rejected.

The mechanism is simple: in attempting to render a state of affairs unchangeable (be it equality or inequality), security is enforced in order to paralyze any opposing currents. In the case of the latter, it is not surprising; there is almost an expectation for security to be weaponized in societies where the integrity of individuals is not respected. In the case of the former, however, it is shocking: how can we state that there is overall freedom when we are using one of its components to effectively undermine the other?

It would be irrational to categorize the two patterns of securitization described as identical. After all, they’re put into place for completely opposing objectives, and with completely differing views of the (equal) nature of human beings. Yet, it is still important to note this mechanical similarity between the two. Taking down freedom of expression allows us to take down anything and everything else with it. It enables the blocking of ideas with which those in control of power disagree and the subsequent stripping off of reason from the other (whoever that happens to be) that has endorsed that view. We are our thoughts. Our existence in this world is the result of the actions guided by our beliefs, of the opinions we form by experiencing what we call life. No matter what the final goal is– if we allow ourselves to silence some voices within the wider conversation, we are taking a step away from freedom, and one towards ideological totalitarianism. We are opening the door to deeming the existence of the owners of those voices as inferior. As unacceptable. As unnecessary. We are clearing the path for those who do not seek equality, or freedom, or happiness, but raw exploitable power. For the darker side of the human nature we all share.

Does it sound dramatic? Yes. Can I see the future and know that this will happen? No. But we only have to look back at History, at the manipulation of the truth and of beliefs by the powerful, to remind ourselves that the road down which society once walked is not one we want to return to. 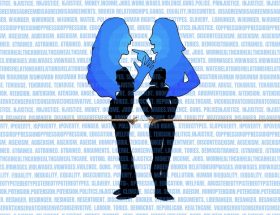 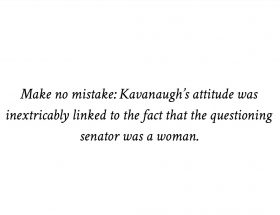 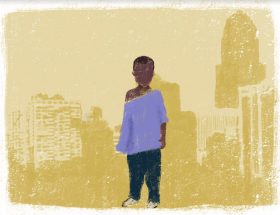