Home ISSUESGALDERASTREAM OF CONSCIOUSNESS I: ON HOW WE FIND OURSELVES COMPLYING WITH SOCIETY

[This is the first of three pieces inspired, yet not strictly following, this format. They all attempt to present different criticisms to society as a whole in a more literary, rather than journalistic, style.]

‘Shoot for the stars and you shall land on the moon’– bullshit. That is what this ever-repeated sentence is: the most essential reduction of the lies spooned down our throats from a young age. Shooting for the stars implies not only having ambitious objectives, but dreaming outside the limitations of what we know to be possible, it suggests walking over the frame of the societal system and building one’s own. Shootingfor the stars ignores, however, that we ourselves have collectively decided– through our choices as consumers, our votes, the types of people we elevate to the status of ‘social deities’– the parameters of that very frame, that we cannot envision an existence outside of it. Our depictions of dreams use cars and marriage as acrylic paint, 9-to-5-jobs filling up the background, and the shinning coating of resignation we can only grasp at too late an age.

I will be 21 years old in two years, I will finish my university degree, I will walk the streets of the world as a real adult for the first time– and there lies the key, I will have to be an adult, for the term is not defined by age but by the responsibilities suddenly thrown at one. I will have to make my degree worth something, anything, I will see myself earning money not for unnecessary travelling, but due to a desire for independent survival; I will engage in cliché trivialities out of a lack of real choice. I will leave university, philosophy under one arm and IR under the other, knowing– no longer because of my radical teenage intuition, but from consciously checked facts and events– that the cruelty feeding our capitalist system, the cocktail of misery elsewhere, unhappiness here and bare injustice, is not the result of small mistakes here and there, but of calculated mechanisms, that all those organizations calling themselves avengers of justice have, at some point, contributed to the current (chaotic) state of affairs. But the most important detail is that I will leave university in one of two ways, and both will most probably impede my drive for change. I may be an academic success (unlikely): maybe I’ll get outstanding results and earn a scholarship for a postgraduate degree, probably pretentious in name, at a prestigious university, maybe everyone will refer to me as a rising star. My revolutionary conscience (it does sound Marxist, but that is the least important aspect of the narrative) may still remain intact, for I would, most likely, still be aware of the flaws of the system, still want to change it– yet I would do so from the comfort of leaning on the approval of the system itself. I would stay in academia, writing essays about how ‘human beings have historically tripped over the same rock more than once’, and regurgitating that same chant to my students, internally labeling myself as a ‘force for change’. The duvet over my body at night would be stitched with the security of academic titles, a Ph.D., awards, articles in well-known magazines and upwards acceleration in the hierarchy.

Ideas are valuable, not only valuable, crucial for change, but are they enough? If in twenty years I am sitting at an office in Yale, telling myself I am changing the world without even knowing if anyone is listening, if my grandiose theses are fertilizing any policies, will I not have failed? Will I not be trapped in this system of fake dreams?

If I am not an academic success, as most of us aren’t, if I leave university being as ‘mediocre’ (according to academic standards) as anyone else, I will start a job, any job, knowing– how to lie to myself?– even before stepping foot in an office, that the power I will have to achieve anything truly significant will be quasi non-existent. I will see myself discussing politics with uninformed co-workers over coffee, inking the name of politicians with slurs and damnations every time taxes are raised. I will know that one can passively read the news, sign petitions that– if the Universal dice so allows– may have some form of impact, but that at the end of the day, as one lies in bed already fearing the next day, all will remain the same– and I will know that I’ll still work for a system that I hate. An exhausting cycle– and precisely because of this, I would see myself seeking distraction in the mundane: in my love life, probably disappointing rather than exciting; in friendship groups riddled with repetitive drama; maybe even in children who I would no longer try to understand after a certain age; in insignificant details within the greater vital scheme. I would find myself focusing on all those details I was for years before told were important, not only by my grandmother’s neighbor, the one living on the fifth floor who claimed to have found the answer to life’s pains, but by cups painted with bland messages and Nescafé adverts. I would find myself accepting existence as it has been presented to me; I would make adult comments, ‘life’s not fair’, ‘that’s the way things are’, not really thinking about the meaning of my new commandments. Maybe my revolutionary conscience would wake up sometimes, a child dead in the ocean, and an old woman evicted from her home, maybe an internal scream would arise in my mind, the need to do something, anything. But things have always been how they are, deep-down everyone knows that. After a couple of days, my anger would crumple, grey with resignation, my conscience would get back into bed, and my friend being cheated on would be way more important than a hundred Syrian deaths.

With time, I will become more conservative, no matter what happens in two-years time: increasingly more aspects of life will feel like personal attacks, my own comfort will seem to gain importance over the most basic of all human rights; I will be old, death will be glaring from a sidewalk, my survival instinct will clench its fangs. I will want to protect myself, to feel less insignificant. Change, whatever that once meant, will no longer matter; it never did. It never does. 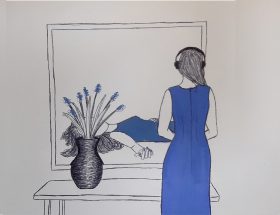 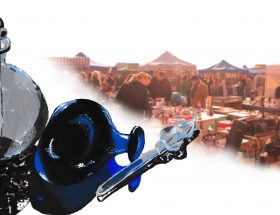 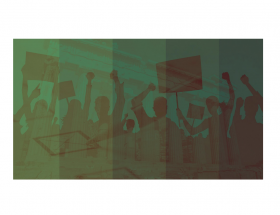