As I am sitting here writing, my two dogs, Calvin and Feynman, both golden retrievers, appear to be attacking one another. They’re jumping on top of each other and biting each other’s faces and pulling each other’s legs; however, even though they look like they’re angry, I know they are not. They’re just playing, and this is how dogs play. Feynman, who just recently turned two, is dominating the “fight,” pushing Calvin to the floor and holding him down, but Calvin, who turned eight earlier this year, doesn’t seem to be too upset about this. He’s on his back, in a submissive posture, pawing Feynman while Feynman bites and grabs whatever he can. But Calvin is thoroughly enjoying himself, just as Feynman is. After continuing to play-fight for another few minutes, Calvin decides he’s tired and steps away, retreatings to his bed to lie down and peacefully chew on a ball until the next activity is presented to him, while Feynman, with even more energy now, prances around the room and jumps on top of the couch and on top of me, with a smile on his snout the entire time. Feynman is ready and full of energy– ready for me to throw a ball, ready for me to say the “W A L K” word, ready for me to do anything, while Calvin is in his own, peaceful, wonderful world.

While Calvin is perfectly content lying on his bed all day long with a ball, Feynman would like to go on hikes, throw the ball, go swimming, steal my shoes, and just joyfully run around. Having these two dogs juxtaposed every single day really shows the different ways that happiness can manifest. Sometimes, when watching Feynman cheerfully play outside while Calvin chooses not to join in, I wonder: “Where did the magic go? Why does Feynman seem happier, more joyful than Calvin?” But the truth is, that Feynman really is not any happier than Calvin is; he’s merely younger. The magic hasn’t faded at all, it’s just changed.

It’s hard to believe that Calvin is only eight, as he acts and seems much older. He hasn’t always been this way. Before Feynman came into the picture, when Calvin was much younger, Calvin acted just like Feynman– full of continuous energy. He would run around, jump around, be loud, chase animals, jump in pools, escape…. He used to do this thing where he would repeatedly drop his ball in the pool, jump in, grab it, swim back, and do it all over again. He would do this for hours until his paws bled… literally. He also loved to go on hikes with me, and when I would take him off-leash, he would zoom and soar over the mountains, back and forth and back and forth. His wild energy and charisma seemed like magic to me.

Watching Calvin get older has been one of the most beautiful things I’ve observed. He has changed so much, but I know that it has all been good change. Now, Calvin asks for–and sits still for–pets. He crawls up onto the couch or bed with me to snuggle. He follows me into the next room just because he likes to be near me, and he lives for the simple pleasures of pats and naps and mealtimes. He’s sweet. Even though he acts differently now, I know that he is just as happy as he used to be: it’s just that different things make him happy now.

Calvin’s health has not been fantastic this past year, so he has been getting extra love and attention lately. My family has brought various ideas to the table: “We should take him on a road trip,” “We should take him to the snow,” “We should take him backpacking,” basically all of the things that we’d imagine would be a golden retriever’s dream. However, the more we think about it, the more we’ve realized that Calvin doesn’t really want any of those things at all. The best thing we could do for him and the best way to make his final time here the most special is to simply let him up onto the couch, to pet him while he sleeps in that one sunspot in the house all day long, to give him all the treats for doing the simplest thing. That is how Calvin experiences happiness now, and his contentment and calm seems just as magical to me as his mischievous puppy-self. 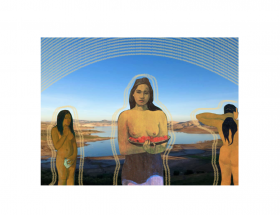 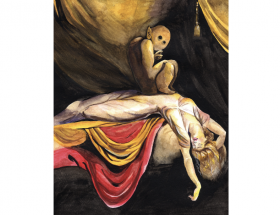