Home ISSUESANIMACan We Ever Move Past Our Own Nature?

Nature vs. Nurture: the centuries-old debate. First coined by psychologist Sir Francis Galton in 1869 (although it’s unclear who initially began the discussion), the term describes the genetic impact on a human’s personality growth versus environmental influences.

Throughout our lives, we’re exposed to a variety of situations and environments, all of which influence our development to some degree. The homes into which we’re born and in which we spend – in the majority of cases – our formative years, our friends, the schools we go to, and our traumas will typically help to shape the person we become, especially when you think about how much our experiences affect our personal development. Sometimes, they change who we are or perceive ourselves to be, and often derail our attempts to overcome the parts of our inner selves we dislike. But how much can we determine by nurture, really, when it’s so mixed up with human nature?

By focusing too much on a person’s background, we forget to consider how much their inherited character traits will shape their behaviours. The foundation of our personalities is formed during our early years, but our personality traits do not appear consistently until the ages of around 11-12. After this age, we begin to build on this foundation. While it is important to remember that our environments, careers, and social interactions have an impact on who we are and who we become, and while the paths they lead us to these choices are also influenced by our socioeconomic backgrounds and formative experiences, our personalities aren’t all down to the experiences we have after we’re born. In fact, 50% of our psychological differences are determined by genetics before we even come out of the womb. Therefore, disregarding either nature or nurture doesn’t allow us to fully understand how these factors might affect our decisions or actions.

Because they both do –we just aren’t always aware of it.

When we become aware of how our experiences and flaws affect us and our daily lives, it can feel like a lightbulb has been switched on inside our brain, illuminating all our past reactions, mistakes and shortcomings. We can make the choice whether to proceed as we had done, seemingly oblivious as to how our traits and traumas are guidingus, or, we can begin to wade through the depths of our inner selves and examine the roots of our personalities.

This is much easier to do when away from your family home, and those who embody similar traits as yourself. When we’re younger, we don’t have the capacity, the desire, nor the means to leave our environments or recognise the flaws in those around us. It is only when we reach adolescence (a time of exploration and relative freedom from the limitations placed on us as children), that we begin to seek variety, and escape from our external environments. However, nature may be much harder to shake. It’s in our DNA, after all.

Yet, as teenagers, though desperate to escape them, we rarely recognise the actual degree to which our upbringings have affected us as individuals. Self-awareness hasn’t yet materialised in our squishy, One-Direction-filled-brains, leaving us open to the influence of others, and the resulting effects they have on our personal development.

The older I get, the more I see traits in myself that mirror those of my family. The ways my parents react to their triggers are also present in myself. We share similar, seemingly odd ways to express ourselves, and we share the same lack in communication . Our habits, routines and mannerisms are are ours, and differ from those of my friends.

Back then, the more of these traits I spotted, the more annoyed I became. The inner conflict that arose inside me, swelling at the appearance of my parents’ flaws, was made worse by the knowledge that I also did those things. My teenage desire to be my own person was being scuppered by my genetics and my environment, which only served to irritate me further, and I became so caught up in this that I failed to see the good traits I’d inherited. My ability to problem-solve and my sense of humour, for instance.

Often, it was hard to distinguish what was a result of nature and what was nurture. When I watched my family members, observing ticks and quirks in their characters, I found it almost impossible to tell the difference between them all. I’d been in their presence for so long that all these attributes, the results of both nature and nurture, had blurred together. I couldn’t tell them apart, especially since we’d never been an open family, and as a result I knew little about their individual pasts.

Perhaps if I’d asked someone else, they could’ve told me which of my personality traits seemed inherited, ingrained, and which were mine. When you’re the one with the attachment, it’s harder to separate yourself from the situation or surroundings as there’s no emotional distance. It was only once I stopped fixating on every trait I didn’t like that I began to stop reacting negatively to them. Ignoring the pang of annoyance in my chest every time I heard myself use a phrase my Mum often used, especially when it was one that had always irritated me. Only then did I learn to distinguish what was habitual, born from my environment and ingrained in my head, and what was a result of my genetics.

But, I can’t deny that both were equally important in forming my early personality. And therein lies the question– are these genetically inherited personality traits so deeply igrained in us, so intermeshed with our upbringings that it’s impossible to ever move past them?

While we can’t be held responsible for our childhood circumstances, as they were out of our control, they’ll still affect how we deal with situations in adulthood. In a similar way, though we have no input into our genetic makeup, it still will affect who we become.

But the influence of childhood circumstances is often easier to identify. The instability that arises from moving house often or having a turbulent home life will of course affect us in many ways, ways that often go unnoticed until adulthood when we’re forced to confront our mistakes. Understanding the influence of our genetics may require a bit more digging and self-reflection to truly understand.

Sometimes, these go deep enough that they seem to be a permanent fixture in our personalities. You begin to believe the old saying, ‘a leopard never changes his spots,’ because you can’t seem to change yours. The personality traits you hold and do not like, perhaps influenced by nature or perhaps nurture, feel so rooted in your being that even a bulldozer can’t uproot them. Maybe, they make you angry, or depressed, or conjure feelings of low-self-esteem.

Those traits of mine, the ones I see mirrored in my family members, will often incite irritation or self-consciousness. Whether those traits are a result of ‘nature’ or ‘nurture,’ is up for debate. But, I’ve found when in the pursuit of self-improvement where these traits originate doesn’t really matter.

It requires work to pick through the tangled mess of our ‘self’ and weave new, healthier thought patterns and behaviours. Finding freedom from the traits we no longer want to embody – those that sometimes feel like a puppeteer is controlling our actions with strings –is a messy, isolating and difficult process, often involving a shift so minute we barely notice it’s happening.

The moment when we realise we aren’t tethered to these traits is the moment we can begin to move past them. Looking back on past mistakes and wrongdoings, noticing how our pasts, whether a result of nature or nurture, affected these situations, can provide great insight into our characters and motivators.

But even if our traits are predetermined, and our backgrounds feel inescapable, even if they make us feel messy and dysfunctional, there’s always good amongst the bad – and a chance to be the person we envision and not the one set out by design.

We should strive to improve on these aspects of ourselves, to move beyond our pasts and the traits they’ve instilled in us.

Otherwise, how will we ever fulfil that teenage desire to be our own person? 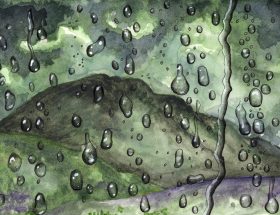 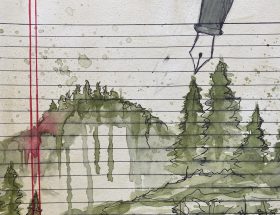 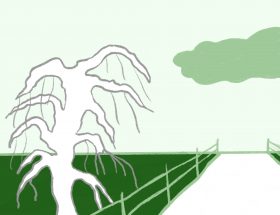